So, yeah. I am going to make a badge that says “I survived my 10th year anniversary!” because it was that off the hook, yo! What is the secret to my success? I’ve found that if you make a list of the things you want to accomplish on special occasions, you get through them with only minimal injuries.

Early in the morning:

1- Go to Walmart and pick up blood pressure meds along with toothpaste.

2- Go to Petco to buy special dog food for Mocha (and Tazz).

Sure, it may not sound very exciting to you but it was to us. Especially when the Petco guy tried to sell us a $57 bag of dog food. Was it that expensive because it had cats as one of the ingredients? Nope. The guy said this dog food didn’t have any chicken beaks or cow tails in it and I was like, well, if I was feeding babies instead of dogs, I guess that would matter to me but if Andy eats that stuff in hot dogs, my dogs are not going to get any special treatment.

4- Get ready for night out

When we got home after running our errands, I started my beautifying treatment of showering and shellacking make up and hair spray so that I would look somewhat respectable. As I was attempting to put on my first set of eyelashes, Andy knocked on the bathroom door and asked “how’s it going in there?” and so I jumped because I was not expecting to be rushed on the one day I was actually trying to look presentable so the eyelash glued itself to an awkward part of my lid.

Well damn! I didn’t have time for corrections since the husband was obviously impatient so I brushed my bangs over my eye hoping a strong gust of wind wouldn’t reveal my freak-show-ness and finished up my primping.

We had a great time at Wildfire. I was tempted to have a few cocktails but, unfortunately for Andy, I become a douchebag when I’ve been drinking (it seems I push the limits of a joke because I think I’m being playful at which point Andy becomes irritated and I ruin evenings) so I decided to only have ONE very delicious mojito.

After a scrumptious meal at Wildfire, we went to IKEA to pick up a bookcase for my sister but we hadn’t realized how uncomfortable we would be walking through that ginourmous store, me with my high heeled boots and Andy with his overindulged belly, so we made a quick exit once we found what we needed.

After IKEA we dropped off the bookcase at my sister’s house and stayed for a little bit to play “hoops on your arms” with my 2 year old niece. So cute!

Then we went home where Andy went on his computer and I watched SAW with brother-in-law Jim.

10:30 whoowee! I was pooped due to all the excitement of the day! I left Andy to his ORC killing and went to bed where I dreamt of Mojitos on high shelves. 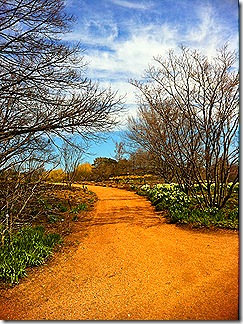 Do you think the celebrating of our 10th anniversary ended there? Well you’re wrong! The next day we went to the Botanic Gardens for a nice long walk. After that we did our grocery shopping so Andy could cook a nice romantic dinner for me since Sundays are brother-in-law Jim’s nights to go out. Much to our surprise, he decided to stay in that night so Andy’s romantic dinner for TWO became a dinner for TWO PLUS ONE. After dinner Andy went on his computer and brother-in-law Jim and I watched the Exorcism of Emily Rose and then a documentary called ‘Chicago by Boat’ on PBS.

The weekend’s excitement finally got to me so I went to bed and left Andy killing more ORCs. I couldn’t wait to go back to work so that I could have peace and quiet with a side order of relaxation. My old body cannot take all this exhilaration. I really hope our 20th anniversary is a little more tame because I will be a whole decade older and I’d really hate to break a hip.

We are like those expensive cheeses that have been “aged” to perfection.

You just have to ignore the smell, scrape off the mold and wash it down with wine.  What am I talking about? Mine and Andy’s 10 year anniversary of course!

I know. I can’t believe we have withstood floods, droughts, head butts (I headed butted him once when we were dating), pets, family members (kidding)(maybe) and pretty much every unreasonable mood swing known to mankind.

At this very moment, he is yelling his head off at the TV because he thinks the men refereeing the Bulls game can hear him and I have to admit to not finding him very pleasant right now but then he will have to put up with all the shopping I’ll be doing at IKEA later today so I guess we’ll be even Steven. Fast forwarding the unpleasant moments to when you have dessert at the end of the day is what marriage is all about, people.

It’s been a tough year for us… well, a tough couple of years really, but we’ve managed to be all kinds of cliché and weather all storms. We’re like those new fangled deck materials that won’t dry up and blister even after being hammered by hail or burned by the sun. Yep. Old cheese and decking material is what we are.

We shall celebrate by going to Wildfire for a nice steak, then some shopping and then we will come home and watch some TV. Just me, him and brother-in-law Jim. Very romantic!

Well, it’s time for me to go take a shower so that I can get away from the crossfire because apparently the referees are all being bribed to make the Bulls lose and my ears are beginning to bleed from the yelling.

Happy Anniversary, Andy! And many more! 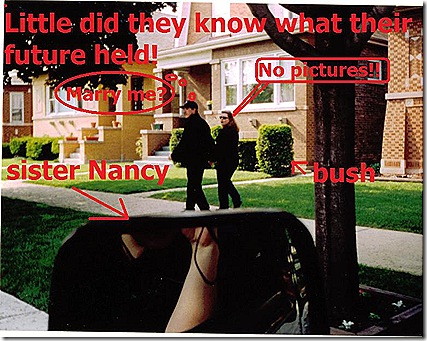 I call this “Day of proposal” 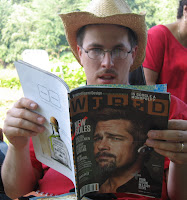